Setting aside questions of Ferrari strategy for a moment, nobody can deny that Carlos Sainz Jr was a popular winner at last week’s British Grand Prix. The man from Madrid is from good racing stock – his father Carlos Sainz turned 60 this year and is still an active rally driver – and the only real surprise is that it took 150 races for Sainz Jr to find the top step.

There is a school of thought that until a driver does so, he can’t fully relax into his role and get the most out of himself. There is certainly the feeling that Sainz turned a corner this year, and Mattia Binotto’s comment last year that Ferrari has the best driver line up in 2022 suddenly sounds less like hyperbole and more like an objective appraisal. Sainz is one of four drivers to complete more than 120 races before recording that maiden victory, and he’s in very interesting company. 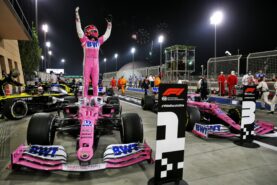 In 2020, Sergio Perez had built a reputation as a safe pair of hands, a man who could get the most out of a substandard car and could work magic in eking out maximum tyre life. Perez was told that despite overperforming in what was then the Racing Point, there would be no place for him in 2021. What a moment to score his maiden win, in his 190th race.

The rest, as they say is history. Checo has proved to be more than just a reliable number two driver at Red Bull, and after once again collecting a solid podium at Silverstone, he’s the pick of the Formula 1 betting odds at a very tempting +1000 for the sprint race at Austria next week.

Mark Webber – not bad for a number two

For Checo, driving alongside the greatest talent of his generation has brought out the best in him. It was a case of same team different story in 2009. Sebastian Vettel was the man of the moment, and teammate Mark Webber felt permanently in his shadow.

Webber’s first victory came in his 130th race at Germany in 2009, but he was unable to turn it into a coherent challenge for the title. As he famously said after winning again at Silverstone the following year, not bad for a number two driver.

With 323 F1 starts, only Kimi Raikkonen and Fernando Alonso have competed in more races that Rubens Barrichello. The man from Sao Paulo wore his heart on his sleeve, and when he finally recorded his first win at Hockenheim in 2000, it was in his 124th race – a record at the time.

Rubens couldn’t contain his emotions on the podium that day, but that’s ok, neither could the fans. In fact, the sight of grown men wiping away a tear became a feature of each of Ruben’s 11 victories over the subsequent 11 years. There hasn’t been a more popular driver in F1 before or since.