Formula 1 has always been a globally supported motorsport, but U.S. fans have rarely been a deciding factor or contributor to the sport’s overall viewership. This factor is dramatically changing.

The question on everybody’s mind, « why? », why are Americans from Florida, New York, Texas, and many of the most prominent states suddenly becoming interested in F1?

There is no sole factor creating the popularity of F1 in America, so let’s take a look at the reasons behind the rapid growth of F1 fandom in the United States.

When Netflix decided to collaborate with Formula 1 to create their racing docuseries, nobody expected the product to evolve into the most-watched sports series of the last decade.

We’re now four seasons deep into Drive To Survive as the filmmakers gave the audience an in-depth look into the world of Formula 1. The show’s popularity has boomed in the U.S., and ultimately, it has created a plethora of fans, who are, in turn, now fans of F1 racing as a whole.

2022 has witnessed the return of American tracks to the thoughts of Formula 1 planners, and most recently, we saw a massive success at the Miami Grand Prix. This was a huge step towards the acceptance and growth of international motorsport on North American land and a sign of things to come. 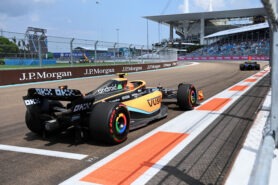 « The growth in the U.S. is significant, » said Stefano Domenicali, Formula 1’s CEO. « It’s significant for the whole F1 world for many, many reasons.

“There’s a different level of maturity of our product that changes from country to country. We have the privilege of explaining it and starting from zero (in the U.S.). There are a lot of dimensions we need to explore. This is on our side to ensure we keep the hammer on with content and give our fans new ways to develop a knowledge of something brand new here.

“The future depends on us. “

In 2012, the United States was reintroduced to the F1 calendar and began taking place at the new Circuit of The Americas in Austin, Texas.

Following the inaugural Miami Grand Prix earlier this year, the sell-out Miami International Autodrome was a positive beginning. The F1 also confirmed another U.S. location in Las Vegas for the 2023 season.

Throughout the history of F1, there haven’t been many races hosted on American soil. After past attempts in Arizona, Indianapolis, and Las Vegas to break the American market, F1 state-side almost seemed doomed as the audience preferred NASCAR and their open-wheel IndyCar Series.

Twenty-five years ago last month, Phoenix hosted its first Formula One Grand Prix with poor planning. It wasn’t a thought-out affair, as nobody considered the blistering heat of the Arizona desert in the middle of June. However, times have changed, and the planning and preparations for F1 racing in America are covered from all angles.

With the likes of Fubo Arizona, and while Phoenix locals may not have their own track on the F1 calendar, sports betting has been another huge factor in the growing popularity of Formula 1 in America.

When PASPA (Professional and Amateur Sports Protection Act) was declared unconstitutional in 2018, the floodgates for legalized sports betting throughout the country were opened. It began with New Jersey and a handful of others, but as of 2022, more than 30 U.S. states have joined the party in receiving legal authorization to allow sports betting.

Almost in unison with the Netflix documentary, sports wagering on Formula 1 has been a significant reason behind a growing interest from the American public. Yes, most U.S. citizens prefer the NFL, NBA, MLB, and NHL. Still, with almost every sportsbook in America offering some form of F1 betting, there’s no denying that the public interest in F1 wagering is trending in an upwards direction.