Aug.30 – Even at Formula 1’s clearly dominant team, the pressure is still on.

« It was easier than expected, » the 79-year-old beamed to Sky Deutschland after Sunday’s Belgian GP. « To be honest, we weren’t too sure of ourselves, but after the first few laps we saw that Max was significantly faster than the rest of the field. 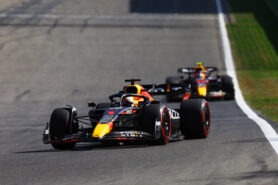 « The ease with which Max is currently performing these services is incredible. It’s a combination of his self-confidence and the incredible driving class of Max Verstappen.

« Our engine is reliable and can keep up. Everything is fine at the moment. »

Red Bull has denied rumours that a special lightweight chassis made its debut at Spa-Francorchamps, and one clear sign that Verstappen was the main key to his dominance is the fact that teammate Sergio Pérez is not directly on his heels.

« He has definitely improved, » Marko said, « but he has to be fully there from the first practice session. Maybe then we’ll manage a couple of 1-2s.

« That would be the first time we’ve finished first and second in the world championship. That’s our next goal. »

Former F1 driver Christijan Albers agrees that Verstappen’s dominance is more about the driver than the car.

« That it’s the deadly combination of Red Bull and Verstappen that makes the difference is painful for Perez. If I had been Perez, I would have kept my helmet on after that race, » he told De Telegraaf.

« It’s also nonsense that Perez is a ‘tyre whisperer’. Max has had that under better control for several seasons, » Albers added.

From Ferrari’s perspective, however, the situation is clear and Leclerc, Carlos Sainz and Mattia Binotto have all hinted that the 2022 F1 title is effectively now gone.

« It was like they had no downforce, but in the corners they were just as fast as us or even a little faster, » Leclerc said. « That’s pretty worrying for us as we don’t have an answer at the moment. »