Fernando Alonso is one of the most recognizable Formula One drivers of the 21st century, winning two world championships and 32 individual races throughout his 21-year career. The Spaniard is celebrated for being the man to knock Michael Schumacher off his perch in 2005, ending the German’s unrivaled domination of the World Drivers’ Championship in the early 2000s. The fact that Alonso did it in a Renault that lacked some of the cutting-edge technology of Ferrari or Mercedes cars made this feat all the more impressive.

Nowadays, the man from Oviedo has had to take a backseat to a new generation of driving phenomena, including Lewis Hamilton, Sebastian Vettel and Max Verstappen. He is still competing at 41 years of age, demonstrating his longevity and passion for the sport. Aston Martin recently announced the signing of Fernando Alonso for 2023, and the team will be hoping he can power them to glory. Stay with us as we explore whether or not this will really be the case.

Fernando Alonso: one of the best F1 drivers of all time?

His career stats have undeniably dropped off since the glory days of the mid-2000s, but it can still convincingly be argued that Fernando Alonso is one of the best drivers of all time. He shook up the Formula One world in 2005, winning the World Drivers’ Championship at the tender age of 24. Nobody expected the young Renault driver to pull it off, sending the bookies and F1 betting enthusiasts into overdrive. 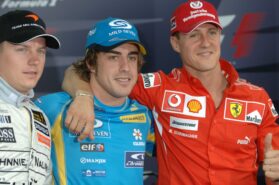 Bookmakers named Alonso the favorite to retain the title in 2006, even with Schumacher looking for revenge. This is a great example of the Spaniard’s incredible natural talent, convincing everyone from the bookmakers to casual Formula One fans that his 2005 title was no fluke. Despite a questionable ban on his Renault’s tuned mass damper, Alonso prevailed in a tight contest against Schumacher to win a second consecutive World Drivers’ Championship.

Unfortunately, these two titles were the last that Alonso would pick up. The rise of a young Lewis Hamilton played a significant part in this, together with the fiery rivalry against Kimi Raikkonen. Still, Alonso is fondly remembered as one of the best Formula One drivers of all time, in the twilight of his career.

A timeline of the Spaniard’s career so far

Alonso has driven for his fair share of Formula One teams over the last two decades. Ironically, he only won the Drivers’ Championship in his two years at Renault, despite his move to racing giants like Ferrari and Mercedes. The Spaniard seemingly enjoyed being the underdog far more than the favorite – an encouraging sign for his next spell at Aston Martin.

Here is a list of Formula One teams Alonso has driven for over his career so far:

About the Fernando Alonso to Aston Martin deal

Alonso had only signed for Alpine (previously Renault) in 2021, so there was an element of surprise when the Aston Martin deal was announced. One primary reason he left Alpine was because of their focus on Piastri, with Alonso claiming he didn’t feel they wanted him as much as Aston Martin did. He will take the position of the outgoing Sebastian Vettel, who recently announced his retirement.

Alonso said in a statement: “this Aston Martin team is clearly applying the energy and commitment to win, and it is therefore one of the most exciting teams in Formula One today”. He will partner Lance Stroll for the 2023 season, hoping to kick-start his career with an era of undisputed success with the recently rebranded Aston Martin team. The Spaniard signed a multi-year contract worth an estimated $20m a year, so it’s clear the team still holds him in high regard.

Can Alonso elevate Aston Martin in 2023?

Formula One has changed a great deal since the last time Alonso won a World Drivers’ Championship. New rules and technology have altered the landscape significantly, but there is no reason why Alonso can’t return to his former glory. If nothing else, he will be a valuable senior asset to the team, guiding their youth drivers to one day search for their own success.

If Aston Martin can deliver Alonso a powerful and reliable car, he will certainly be in the mix come the end of the 2023 season.