Sep.5 – After yet another all-round Ferrari defeat, Charles Leclerc has reiterated his claim that winning the world championship this year will be « tough ».

His points deficit to Max Verstappen after another victory for Red Bull at Zandvoort now stands at 109, meaning the Dutchman no longer has to realistically target a constant flow of wins over the remaining 7 grands prix.

« The Red Bull is the fastest car at the moment, especially in terms of race pace, » Leclerc said late on Sunday. Mercedes also seems to have gained in race-pace performance, so this title looks tough. » 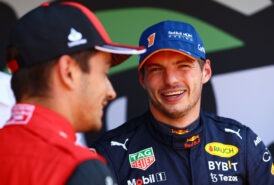 Red Bull boss Christian Horner, however, is not celebrating yet. « We’re in a great position and we’d probably have to work hard to lose the lead, » he said. « But nothing is resolved until it is mathematically impossible. »

But the situation does not look likely to improve for Ferrari this weekend at Monza – the concluding round of an arduous triple-header.

« On paper, it’s not our best track, unfortunately, » Leclerc said. « I think the performance on paper will be a bit more difficult than here. »

The most galling aspect for Ferrari is that an increasingly farcical streak of strategy and pitstop errors is also continuing, whilst Leclerc admits that his car has been « struggling a bit more in race pace » over the most recent string of races.

« Now Mercedes is also in the fight and they are very quick, » he said.

Verstappen is also surprised at the latest trend, admitting after his home Dutch F1 GP win that he « expected Ferrari to be a little bit faster ».

Leclerc agrees: « This is the main focus at the moment – to try to bring back the speed that we had at the beginning of the season as we seem to have lost it. »

It is a sentiment backed by his Ferrari boss, Mattia Binotto.

« We weren’t fast enough in Hungary, Spa and here either, » he told Viaplay. « If you’re not fast enough, you can’t fight for the best possible result.

« Is it the speed, the setup or the confidence of the drivers? » he wondered.

Former F1 driver Ralf Schumacher, however, wonders if Binotto is reacting properly to the stream of team errors.

« It wasn’t just the pitstop with the missing tyre or the wheel gun in the way – I just don’t understand it anymore, » he told Sky Deutschland.

« Even if it’s a great team, too many mistakes are made and there are no consequences for that. Nothing seems to have changed in Maranello. »

« Last time I said we can no longer rely only on ourselves, and that applies now even more than before, » said the Italian.

« From now until the end of the season, the mood is also important because we have to focus to improve next season. »

Binotto denies that the FIA’s recent clampdown against porpoising could be a simple explanation for the loss of pace.

« No, that’s not the reason, although there have been some rumours, » he said. « We have to look at the overall package. »